When quantum computing supremacy will be achieved?

Some months ago, Google announced that it had achieved “quantum supremacy” with its Sycamore quantum processor. That is, to perform a complex exponential calculation in a relatively short time that it would take years making it with the most powerful traditional computer. In particular, they showed as an example a problem that spent 200 seconds solving it with their 53 qubits (quantum bits) quantum computer, while it would take 10 000 years!! to solve it in the most powerful computer nowadays (the IBM Summit)… Quantum supremacy has been achieved!

But not so fast! Some days later, the IBM engineers seized to deny the announcement saying that the operation would take only 2.5 days on their computer and not 10000 years. Well 200 seconds instead of 216000 seconds (2.5 days)… OK, perhaps quantum supremacy has not been achieved yet, but it is a 1000 times faster. That’s a gigantic step!

The competition between IBM and Google to see who demonstrates quantum supremacy will be fierce, considering that IBM is also developing its own quantum computer. However, it has not found the algorithm that can benefit from the quantum capabilities.

https://youtu.be/-ZNEzzDcllU if anyone just wants to see the Google demo…

Let’s go in depth a bit, what exactly is a quantum computer made of? Where does that computation power come from? And, mainly, are the quantum computers useful if the supercomputers are more and more powerful?

To answer this last question it is necessary to understand that there are exponential problems that can not be approached by boolean or traditional computers. To better explain the concept of an exponential problem I will use a tale of a sage to whom a king promised a prize and this sage asks the king to reward him by placing a grain of rice on the first square, two on the second one, four on the third and so on. Every square must have double the amount of grains of rice than the previous one. The king accepted the sage’s request and gave his word… it was just some grains of rice! But soon he realized that all the rice needed to fill the chess board was more than all the available rice in the whole kingdom, the whole earth and will cost all his fortune. 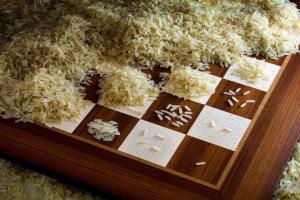 OK, OK, but if according to Moore’s law, the computing capacity gets doubled every two year… we just have to wait a few years to achieve the necessary computing capacity. In the case of IBM, 15 years would be enough to have the same computing power than the quantum computer. The problem is that we are getting close to the physical limit of miniaturization, where it would be impossible to reduce more the size of transistors (tunnel effect) and, above all, dissipate the generated heat.

However, the quantum computers are not limited by miniaturization. They take advantage of the quantum properties of elemental particles, mainly the electrons. But is it possible to control an electron? Well, it is difficult to work directly with them (they usually do not stay still) but there are atoms that can be used and where the electrons “orbit” around their nucleus. And its calculation power increases with the number of interconnected electron’s cages.

Once an atom is captured, we can already use one of the properties of the electrons of that atom as an indicator of the state: the spin. The electrons are like tiny magnetos and the polarity can be oriented in many directions. Depending on the direction of the polarity, up or down (↑ or ↓), we say that represents a zero or a one. In reality, it is more than that, a qubit allows that it can be a zero and a one at the same time, this is called superposition. How can it be a zero and a one at the same time? In the real world, there is something called determinism, or it is a zero or it is a one!. Be patient, we will get there… A way of seeing it is the next image, where we go from a binary technology (0 or 1) to a quantum one, where it is possible to regulate how much 1 and how much zero there is in a qubit. However, the “amount” of 1 and 0 has to follow certain rules.

What? Parallel worlds? You must be kidding…

As I was saying, the physicists can confine atoms in ion chambers thanks to magnetic fields keeping them inside and using lasers (photons) they can act on the electron’s spin to change it… they have constructed a quantum transistor! The problem is that it is necessary to have complex facilities close to the absolute zero to do all this… and they look like that: 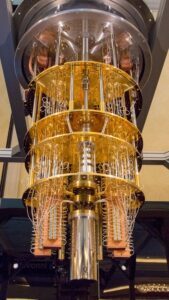 What can make a few connected atoms have that supercomputing power? Well, two natural properties of the quantum particles: superposition and entanglement.

Let’s start with the entanglement. It happens between 2, 3 or more electrons, and it is like if the particles had instant communication between them and that allows them to synchronize its Spin direction (state) no matter how far they are. It is like an information teleporting not at the speed of light but instantaneous. This contradicts the relativity theory when this has established that no speed can be higher than the speed of the light, and also contradicts the logic of our reality, but quantum is like that.

I know it is crazy! This phantasmagorical property has fascinated many scientists, such as Schrödinger and Einstein among others, who never believed it completely. Einstein called this effect “spooky action at a distance”.

In summary, having a system with two entangled particles, when we randomly change the Spin of one of them, the other one changes automatically wherever it is (even in the other corner of the universe) and with no information channel, faster than light!

Are you ready for the second property? Hold on, here we go with superposition. This is a property that allows the qubit to have more than one value simultaneously. Imagine that the property was the colour, they could be green and red at the same time. It is just like generating new dimensions with each superimposed qubit and each one of those dimensions keeps a value. If we have a computer of 20 qubits, have 20 dimensions where each one keeps a value, but from our 3D reality, we see it superimposed…. new dimensions? Yes! The calculation space gets multiplied and that means we can distribute the calculation among them and make them… all at the same time!

I recommend this nice video about parallel universes, it will make you laugh for a while: https://www.youtube.com/watch?v=vBkBS4O3yvY

What order of magnitude is the improvement?

In terms of performance, it is difficult to make parallelisms between supercomputers and quantum computers, because it is necessary to move from the “boolean logic” to the “quantum logic”. However, in a classic computer an operation takes a binary input value and generates an output while in a quantum computer, all possible combinations are performed at the same time, in parallel.

Just an image to understand the exponential capacity of qubits to store information:

Using 3 classic bits, it is possible to store a value like 011 (3 as a real number). Using 3 qubits is possible to store 8 values thanks to its superposition properties. This video explains that very well. https://www.visual-science.com/projects/quantum-computers/animation/

And this for when?

Developers, relax. If someone is thinking about making a quick course about quantum algorithms, I recommend you to wait. The quantum computers do not have traditional arithmetic or logic operators. In fact, there is no loop structure such as “if, then” or “while”… It is not possible to recompile a code in C++ or Python and run it in a quantum computer.