On March 8, International Women’s Day was celebrated all over the world. Date in which millions of women and men take the streets of thousands of cities around the world (Madrid, Paris, Buenos Aires, Oslo, Istanbul, La Paz, Quito, Beijing, London …) with the aim of claiming equal rights and opportunities between genders, one of the most acclaimed issues being: the elimination of the wage gap and the gender gap in some sectors, and what is known as the “glass ceiling”.

In the technology sector, the existing gender gap presents a particular issue to revise, due to the fact that the continuous rise of technology makes of this industry, one expected to provide the most jobs worldwide.

According to El Libro Blanco de las Mujeres en el Ámbito Tecnológico [the White Paper on Women in the Technological Sector] published in 2019 by the Secretary of State for Digital Advancement of the Ministry of Economy and Business [Spain], within the framework of the Gender Table for the Digital sector, the problem rises from the stereotypes and gender roles of today’s society, which cause fewer women to be attracted to the technology sector. This reinforces, for each gender, “the prejudices about their abilities, interests and motivations”. 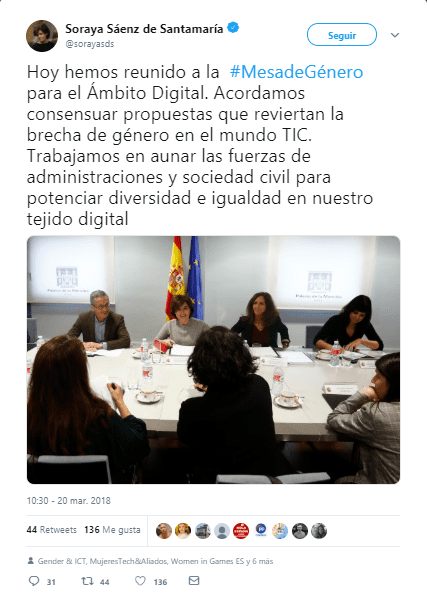 This “academic segregation” is then shown in the labor market, so that, according to this White Paper, in Europe only 30% of people working in the Information and Communication Technology (ICT) sector are women, taking into account that about 7 million people are dedicated to it. Likewise, the displacement of women’s jobs by technology is greater than in men: according to the International Monetary Fund (IMF) 26 million of them are at high risk of being withdrawn in 30 countries of the Organisation for Economic Cooperation and Development (OECD) in the next 20 years.

Getting rid of this gender gap in the technology sector would not only benefit the female part of the population, but, according to the study of the European Commission “Women in the Digital Age”, a greater incorporation of women in this sector would benefit “up to 16 billion euros per year for the joint GDP of the European Union“.

What happen in the bussines sector?

With regards to the business sector within the countries of the European Union (EU), a general trend is that the age of women is a risk factor in terms of their insertion in the technological labour market: according to data from the National Institute of Statistics (INE), the employment rate of women between 25 and 49 years with children decreases, while that of men increases. Therefore, as concluded in the aforementioned White Paper, “while among women having children has negative repercussions on their careers, among men, it is an added value that increases their employment rate”.

Here you have a graphic that ilustrates the situation in recent years. 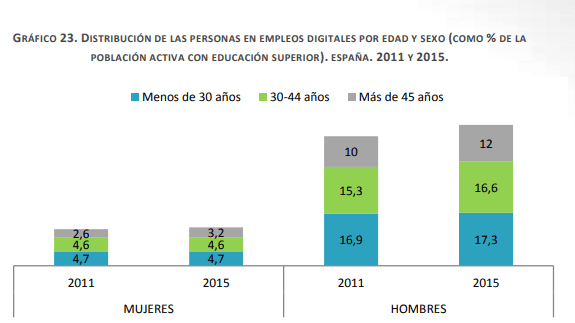 Other issues to take into account within the technological business sector, is the existing wage gap between genders and the lack of women in management positions of companies (glass ceiling).

According to the study, The Stage of Wage Inequality in the Workplace, 63% of salary proposals are higher for men than for women, being for the same company and position. In addition, according to data provided by the study “Women in the Digital Age” already mentioned, it is concluded that, although women are underrepresented in executive positions in general, in the ICT sectors this situation is aggravated.

In this situation, the “key technology players” like Google (Fuencisla Clemares), Facebook (Irene Cano), IBM (Marta Martínez), HP (Helena Herrero) or Microsoft (Pilar López) have in their Spanish subsidiaries a female leadership, It shows that, instead of aggravating the gender gap, there is a tendency to improvements in the technological field gender-gap situation.

The EU takes into account the problem and with their program, Digital Europe, they are  promoting and encouraging technological skills among women and, above all, teens and even younger girls. According to the White Paper on Women in the Technological Scope, mentioned before, the EU urges the technological world to reach out to citizens, especially with focused technology events.

Considering the current situation, OpenExpo Europe, as an event, supports diversity with the aim of enhancing participation and increasing the visibility of women in the sector, this year OpenExpo Europe will present again the professional forum Woman Leader Talks, where this one as other issues can be discussed and analysed to come up with potential solutions.